{This is the fifth post in a review of Preston Sprinkle’s book Fight: A Christian Case for Nonviolence. Previous posts here: 1, 2, 3, and 4} 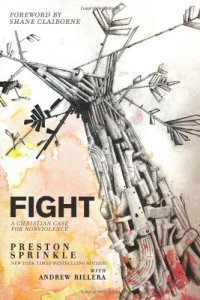 In chapters 4 and 5 Sprinkle covers the Israelite conquest of Canaan (“Kill Everything that Breathes”) and the rest of the OT (i.e. Judges-Malachi; “Swords Into Plowshares”). For the sake of brevity I’ll limit my interaction to three summary statements contained in these two chapters.

. . . nowhere in Scripture, Old or New Testament, is Joshua’s conquest prescribed for future generations. It’s only a description of what happened. There is nothing in the Bible that appeals to the conquest as justification to wage war or engage in violence. Nothing. The conquest, like the flood and the judgment on Sodom and Gomorrah, was a one-time, non-repeatable event whereby God judged a particularly wicked people. (91)

The Conquest was indeed a unique event that is “non-repeatable” for the Church. Unlike the Israelites, today’s Christian hasn’t been commanded to eradicate people groups or seize territory. Granting that point, however, still leaves us with two related questions: (1) Does God continue to exercise judgment in human history through human instruments? (2) If yes, may a Christian ever be that instrument?

Turning his attention to the period of judges and kings, Sprinkle detects a national “digression into a warfare state.” As messy as Judges is, however, it’s not until 1 Samuel 8 that “Israel’s descent into secular militarism hits rock bottom.” But support for Sprinkle’s interpretation of this period can only come by a very selective reading of certain passages. For example, he sees Israel’s demand for a king as a demand for military might:

As we saw earlier, merely having a king isn’t the issue. Kingship was sanctioned by God. The issue, according to Deuteronomy 17 and here in 1 Samuel 8, is militarism: they want a military leader who will flex his muscles on the battlefield. Such misplaced trust is tantamount to idolatry, which triggers God’s wrath–wrath toward Israel’s thirst for military might. (100)

The claim that militarism is the issue in 1Samuel 8 just isn’t supported by the text. The contextual evidence makes it clear that the issue is who Israel would trust to rule (i.e. judge) them in Samuel’s absence.[1]  To be sure, a king would also be a military leader. But suggesting that Israel was only after a military leader is a stretch. 1 Samuel 8 isn’t the support he assumes it to be and this is characteristic of several other passages he would leverage for his view.

Finally, Sprinkle points to the pacifist strand in the prophets:

The prophets certainly don’t answer all of our questions about war and violence . . . For now it’s important to see that the prophets proclaim a message that in general moves away from violence and toward peace. And this is how the Old Testament ends. Longing for peace. This longing creates the seam that stitches together the seemingly contradictory portraits of violence in the Old Testament and nonviolence in the New. (113)

But this longing for peace didn’t begin with the prophets. It was the ideal even in times of violence and war (Deut 12:10; Josh 11:23; 2Sam 7:1, 11; 1Ki 5:4). The flip side of the prophets’ message is that, regrettably, war will always have a place in this world until the true King wages that one last battle that will end all war. Until then, is it possible (and even permissible) for the Christian take violent action even though he desires peace?

[1] That a ruler/judge, not a military commander, is the overall interest is shown by: (i) the repetition of the word judge (5x) (ii) the occasion — the people were facing a succession crisis when Samuel’s corrupt sons were set up as judges (iii) the elders’ request was “Now appoint a king for us to judge us like all the nations.” (iv) the stated consequences for choosing a king cover a variety of societal issues–military inscription, taxes, servitude, family intrusion, property rights.