Outside of Scripture, this passage strikes me as one of the most poignant depictions of man’s bondage to sin. 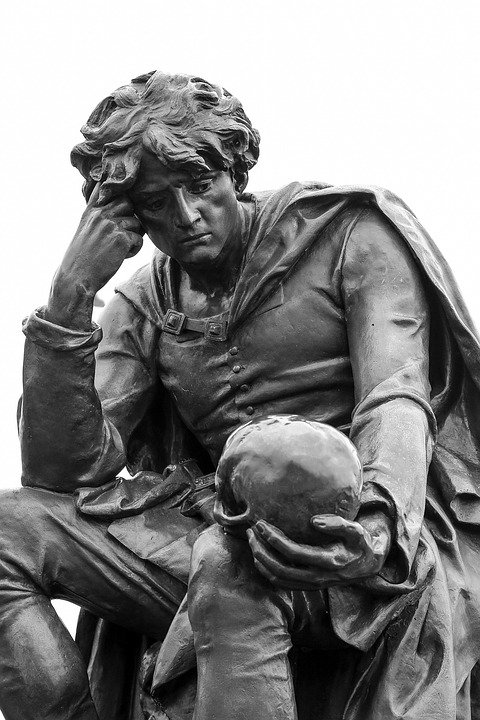 This semester saw Boy #1 and Boy #2 in a course on Great Books of the Western World that included a reading of Shakespeare’s Hamlet. As expected, Shakespeare required a little bit of work on the front end–it takes some effort to re-calibrate the mind’s ear for old English written in verse–but in the end the labor was not in vain. That Bill Shakespeare will give you something to talk about.

The tragedy is best known for Prince Hamlet’s “To be or not to be” soliloquy and rightfully so. But on this reading I found my mind more occupied with King Claudius’ failed attempt at repentance for the murder of his brother (King Hamlet) that enabled him to steal his brother’s throne and his wife. Outside of Scripture, this passage strikes me as one of the most poignant depictions of man’s bondage to sin.

O, my offense is rank, it smells to heaven;
It hath the primal eldest curse upon’t —
A brother’s murder. Pray can I not:
Though inclination be as sharp as will,
My stronger guilt defeats my strong intent,
And, like a man to double business bound
I stand in pause where I shall first begin,
And both neglect. What if this cursed hand
Were thicker than itself with brother’s blood —
Is there not rain enough in the sweet heavens
To wash it white as snow? Whereto serves mercy
But to confront the visage of offense?
And what’s in prayer but this twofold force,
To be forestalled ere we come to fall,
Or pardoned being down? Then I’ll look up.
My fault is past; but O, what form of prayer
Can serve my turn? ‘Forgive me my foul murder’?
That cannot be, since I am still possessed
Of those effects for which I did the murder:
My crown, mine own ambition, and my Queen.
May one be pardoned and retain th’ offense?
In the corrupted currents of this world
Offense’s gilded hand may shove by justice,
And oft ’tis seen the wicked prize itself
Buys out the law. But ’tis not so above:
There is no shuffling, there the action lies
In his true nature, and we ourselves compelled
Even to the teeth and forehead of our faults
To give in evidence. What then? What rests?
Try what repentance can. What can it not?
Yet what can it, when one cannot repent?
O wretched state! O bosom black as death!
O limed soul, that, struggling to be free,
Art more engaged! Help, angels: make assay.
Bow, stubborn knees; and heart, with strings of steel,
Be soft as sinews of the new-born babe
All may be well.

My words fly up, my thoughts remain below.
Words without thoughts never to heaven go.