Christ has put on our feelings as well as our flesh. 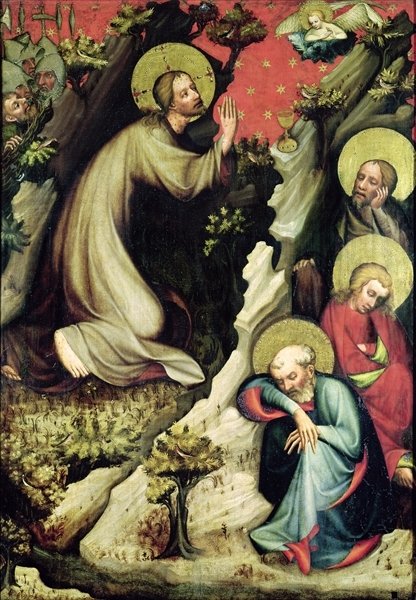 Christ has put on our feelings as well as our flesh. -John Calvin

In his discussion of the incarnation, Macleod turns his attention to our Lord’s human emotions. Perhaps most poignant are his reflections on Christ’s experience through his time of suffering in Gethsemane and on the cross.

To think that all-powerful God submits to human fear & weakness! Macleod is worth quoting at length:

But the narrative [concerning Gethsemane] does not owe its force to the adjectives alone. The whole account resonates the acutest torment and anguish. This appears, for example, in the fact that he took Peter, James, and John with him, not merely for companionship but so that they might watch and pray with him. It was of paramount importance for himself, for the universe and for mankind that he should not fail in his task, and the temptations that beset him on the eve of his agony represented a real threat to the completion of his obedience. Hell would do — was doing — all in its power to divert him from the Father’s will. Hence the supreme urgency of watching and praying; and hence the need for the prayers of others. Could there be a more impressive witness to the felt weakness of Jesus than his turning to those frail human beings and saying to them, “I need your prayers!”?

In the event they failed him. He had to watch and pray alone. Had the redemption of the world depended on the diligence of the disciples (or even on their staying awake) it would never have been accomplished . . . But the impressive thing is that he turned to them at all. How deep must have been his need and his fear!

…It is clear from all the accounts that Jesus’ experience of turmoil and anguish was both real and profound. His sorrow was as great as a man could bear, his fear convulsive, his astonishment well-nigh paralyzing. He came within a hairsbreadth of break-down. He faced the will of God as raw holiness, the mysterium tremendum in its most acute form: and it terrified him…

When Moses saw the glory of God on Mt. Sinai so terrifying was the sight that he trembled with fear (Heb 12:21). But that was God in covenant: God in grace. What Christ saw in Gethsemane was God with sword raised (Zech 13:7; Mat 26:31). The sight was unbearable. In a few short hours, he, the Last Adam, would stand before that God answering for the sin of the world: indeed, identified with the sin of the world (2Cor 5:21). He became, as Luther said, ‘the greatest sinner that ever was’ (cf. Gal 3:13). Consequently, to quote Luther again, ‘No one ever feared death so much as this man.’ He feared it because for him it was no sleep (1Thess 4;13), but the wages of sin: death with the sting; death unmodified and unmitigated; death as involving all that sin deserved. He, alone, would face it without a [covering], providing by his dying the only covering for the world, but doing so as a holocaust, totally exposed to God’s abhorrence of sin.. And he would face death without God…deprived of the one solace and the one resource which had always been there.